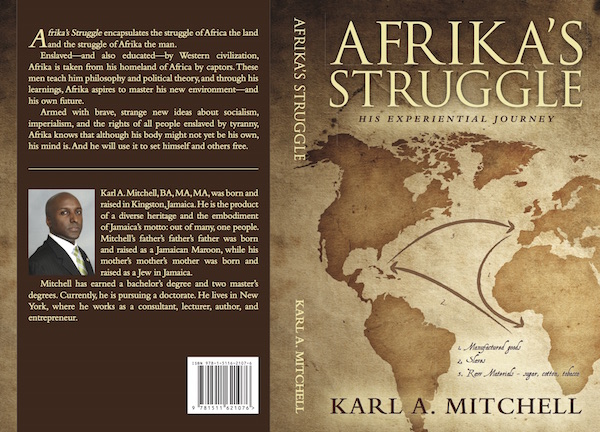 Enslaved – and also Educated – by Western civilization, Afrika is taken from his homeland of Africa by captors. These men teach him philosophy and political theory, and through his learnings, Afrika aspires to master his new environment – and his own future.

Armed with brave, strange new ideas about socialism, imperialism, and the rights of all people enslaved by tyranny, Afrika knows that although his body might not yet be his own, his mind is. And he will use it to set himself and others free.

Mitchell has earned a bachelor’s degree and two master’s degrees. Currently, he is pursuing a doctorate. He lives in New York, where he works as a consultant, lecturer, author, and entrepreneur.

In this historically accurate work of fiction, readers follow the journey of Afrika, an African man descended from an emperor who is first enslaved and then given his freedom by white men.

Captured in Africa and transported across the ocean to the Americas, Afrika’s captors sell him to a German-born plantation owner in Georgia who becomes a father figure to him. A learned man, he teaches Afrika the value and power of an education, instilling in him a love of learning and starting him on a path toward intellectual freedom even before he gains his physical freedom.

As Afrika’s journey continues, he meets a variety of people from different backgrounds who introduce him to new ideas. An English-born abolitionist in New York City, a French intellectual with revolutionary leanings in Montreal, and visits to renowned institutions of learning in Paris and London make a deep impact on Afrika.

These encounters shape Afrika’s view of the world as it is—and inform his vision of how the world should be. Consequently, as his understanding of politics and philosophy grows, so does his involvement in the revolutions in the United States, France, and Haiti.

Choose where you want to buy :